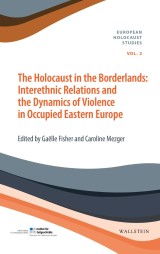 The Holocaust in the Borderlands

Violence against Jews, Roma, and other persecuted minorities in the multiethnic borderlands of Eastern, Central, and Southeastern Europe.

Includes:
Anca Filipovici: The Rise of Antisemitism in the Multiethnic Borderland of Bukovina: Student Movements and Interethnic Clashes at the University of Cernăuți (1922-1938)
Doris Bergen: Saving Christianity, Killing Jews: German Religious Campaigns and the Holocaust in the Borderlands
Linda Margittai: Hungarians, Germans, Serbs, and Jews in Wartime Vojvodina: Patterns of Attitudes and Behaviors towards Jews in a Multiethnic Border Region of Hungary
Goran Miljan: The "Ideal Nation-State" for the "Ideal New Croat": The Ustasha Youth and the Aryanization of Jewish Property in the Independent State of Croatia, 1941-1945
Svetlana Suveica: Appropriation of Jewish Property in the Borderlands: Local Public Employees in Bessarabia during the Romanian Holocaust
Anna Wylegała: Listening to Contradictory Voices: Jewish, Polish, and Ukrainian Narratives on Jewish Property in Nazi-Occupied Eastern Galicia
Miriam Schulz: Gornisht oyser verter?!: The Yiddish Language as a Mirror of Interethnic Relations and Dynamics of Violence in German-Occupied Eastern Europe

Gaëlle Fisher is a postdoctoral researcher at the Center for Holocaust Studies at the Institute for Contemporary History in Munich; PhD from University College London in 2015. From 2015 to 2016 postdoctoral fellow at the University of Augsburg. Current research: History of the Holocaust in Romania.

Caroline Mezger is a postdoctoral researcher at the Center for Holocaust Studies at the Institute for Contemporary History in Munich. Degrees in history from Yale University and Central European University (Budapest), PhD from the European University Institute (Florence). Current research: Twentieth-century history of Central and Southeastern Europe, World War II and the Holocaust.